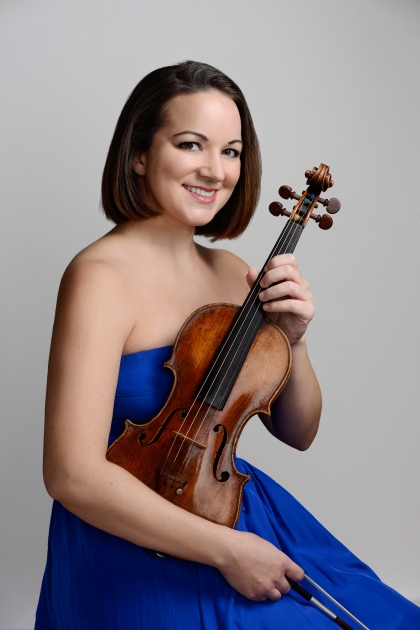 Violinist Ashley Windle is a founding member of the Fair Trade Chamber Music Society and is the violinist of its core ensemble, the Fair Trade Trio, a string trio committed to championing the works of living female composers alongside the standard chamber music repertoire. The New York City-based ensemble specializes in creating accessible performances for all audiences, and is honored to be selected as the 2020 Spotlight Artist for Music for Autism, a concert series focused on enhancing the quality of life and raising public awareness through free, autism-friendly, interactive concerts developed specifically for individuals with autism and their families.

A passionate orchestral player, she is pleased to be the assistant concertmaster of the Washington Heights Chamber Orchestra and was featured as a solo recitalist both in their 2021 Streaming Recital Series and their 2016/17 season’s Spotlight Series. She has also performed with Symphony in C and served as a tenured member of the Reading Symphony Orchestra where she frequently performed as assistant concertmaster. She was a member of the Civic Orchestra of Chicago where she performed with world-renowned conductors including Bernard Haitink, Esa-Pekka Salonen, and Gustavo Dudamel and was a member of the Musicorps program where she developed and performed highly interactive educational chamber concerts. She is a proud member and supporter of The Dream Unfinished orchestra which presents socially conscious concerts annually.

Solo awards include being named as a Leslie Scholar of the Civic Orchestra of Chicago and receiving from the Peabody Conservatory both the Lynn Taylor Hebden and J.C. van Hulsteyn Awards for excellence in performance. She won the first prize in the Baltimore Music Club Competition and was a finalist in the Vancouver Academy of Music’s Young Artists Chamber Music Competition. She has performed in masterclasses for Pinchas Zukerman, Pamela Frank, Ida Kavafian, Ilya Kaler, and Masuko Ushioda.

Originally from Canada, she earned an M.M. from the Manhattan School of Music, where she participated in the Orpheus Institute Chamber Orchestra as principal second and the Kurt Masur Conducting Seminar, and completed both a Graduate Performance Diploma and a B.M. from the Peabody Conservatory of Music where she served as concertmaster of the Peabody Concert Orchestra. Significant teachers and mentors include Lisa Kim, Grigory Kalinovsky, Laurie Smukler, Martha Caplin, Violaine Melançon and Jeanne Preucil Rose.